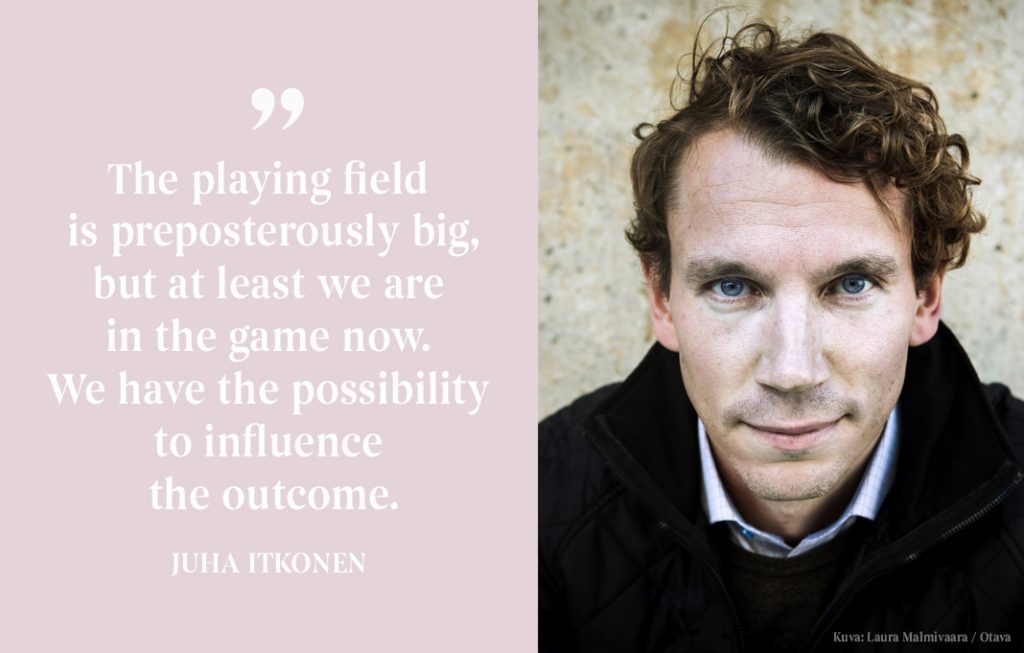 Success in the national league can lead to international games. Unfortunately, this happened to Sanasto and the writers and translators in Finland.

Years of lobbying yielded a desired effect when the public lending remunerations in Finland were raised to the same level as in other Nordic countries. But we had barely time to realise what we had achieved, when our livelihood and copyrights came under threat, this time by the European Union. The threat has a name – Article 12 – and it’s one of the many controversial articles in a massive directive concerning the European digital single market.

I have a master’s degree in political science, so in principle I do have some kind of grasp of how the European Union works. But I’m ready to admit that everything I have encountered has been news to me, and I have learned a lot on the two lobbying trips we have made to Strasbourg.

The DSM Directive proceeds simultaneously along two tracks, in the negotiations between the member states and in the European Parliament. In the Parliament the proposed directive goes through several committees, the most important being the Committee on Legal Affairs, JURI. Right now, the most important thing for us to do is to inform the members of JURI about the problems in Article 12, and JURI alone consists of dozens of members from nearly all the member states.

The playing field is preposterously big, but I would say we do have some advantages. First of all, our own game is in good shape after years of lobbying in Finland. We know it’s possible to influence the decision makers – we know that they want to make good legislation and are willing to listen to the facts from their voters and the European authors directly influenced by the directive. We also know that lobbying is hard, sometimes frustrating work that requires a lot of patience. But we have a game plan, our troops are battle-hardened, and this is why our small country has taken a lot of responsibility in gathering the forces from all over Europe. Several authors’ organisations from most of the EU countries have signed a petition to remove Article 12 from the DSM Directive.

There is always a lot of goodwill towards authors. The Finnish members of the European Parliament and their aides have been enormously helpful in making connections and arranging meetings. The key persons in the process have come to our events and listened to our views. It seems that the information we have provided them has broadened their thinking.

Article 12 is not only about public lending remunerations. The whole article is against the basic principles of copyright and would strengthen the position of the already stronger party.

Our key message is that the Article 12 is completely unnecessary. It doesn’t take into account the different national arrangements or special features of small language areas, and it’s not essential even in those few big member states, where writers and publishers divide the public lending remunerations, and other similar payments, between themselves. In Finland the writers’ exclusive right to public lending remunerations wouldn’t be immediately threatened, but Article 12 is not just about public lending remuneration. The whole article is against the basic principles of copyright and would strengthen the position of the already stronger party in an unprecedented way. It is our duty to try to get the article withdrawn or at least affect its wording while it’s still possible.

What is going to happen then? I’m basically a realistic optimist, prone to severe but passing bouts of pessimism. Bearing that in mind, I’ll try to predict the faith of Article 12.

We are being heard, which is a good thing. As a matter of fact, the openness of the European Parliament has been a pleasant surprise to me: its agenda is so vast that the parliament members are ready to admit their ignorance of the details and are willing to listen to rational, good arguments. As our arguments are.

In my more pessimistic moments I think of the unpredictability of the legislation process. DSM Directive is a complex entity, which seeks to regulate a multitude of different issues. These issues are on the table simultaneously, and when the directive at some point will be forced into its final shape, it will be done with the logic of give-and-take. Everyone gets something and has to let go of something else. Article 12, which is uttermost important to us, is only a pawn in the game.

But you can look at this in a positive way. After the last trip to Strasbourg, we all agreed that at least we are in the game now, we have the possibility to influence the outcome. Let’s do all we can and hope for the best.

Juha Itkonen is an award-winning writer and novelist from Finland